I’ve been working on a secret project for several months now, swatching and thinking A LOT about different issues involved with the construction. I’d be turning it around in my head during the night, still not fully satisfied with the way I had planned it.

And suddenly I found the solution (ahem, let’s hope it turns out as planned when knit up) and I’m really excited to start knitting !

First stage was to create a chart to put it all together. I’ve read a lot about them but still hadn’t done one. It seems there’s quite a few options online (be it special fonts or chart makers in several styles). Also, this article on Knitty was full of good insight. 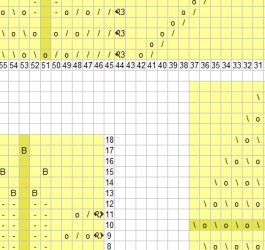 All in all, I ended up starting a plain table in an Excel type software (I’m using Openoffice, a freeware), coloring the area with the right number of stitches. Wrote all the numbers beside (row and stitch count)… and now I’m in with the boring part: filling it in with all the symbols ! 🙂
Of course, you can never find all the symbols you’d want on a regular keyboard but I’ve decided that the most usual ones will be all good with a slash/back-lash, o, -, etc… and i’ll be using letters for the other ones, to be probably replaced later when I import the final table in Fireworks (via a screeshot probably) and replace those letters with custom-made symbols.. Simple, right ? (ETA: I now made a step-by-step tutorial here)

So far, I’m really happy with that method and it works easier than I feared. I love the fact that I can prepare my smaller lace charts, and then copy and paste them in different areas of the final chart ! 🙂

1 thought on “My first knitting charts…”