So my “featured pattern” thing on Ravelry is now over. I thought it might be a good occasion to share a few thoughts on results I got from advertising spots on different sites such as Ravelry, Etsy or Crafster.
We’d all love to advertise for our indie business, but it’s sometimes hard to know what to expect out of it. 😛

Of course this will show only my own experience, and I’m totally aware that results depend a lot from the product you promote. Someone with fantastic knitting/crochet patterns, or really original, may have totally different things to say.

I’ve done a lot of the “Forum banners” on Ravelry, and love them. Not too sure what results I get from them, but they’re really cheap (I usually budget $5/6 per month) and you can target precisely via the forums you want the banners to appear in. Like I have this one “granny square related patterns” that I display in granny square related forums. It probably gets me a few sales here and there but it’s hard to track.

I’ve done once the basic “notebook” format in Ravelry, but it’s a bit more pricey ($15 per month i believe). It doesn’t work as well for me because I can’t really target who I’m “talking to”, whether knitter or crocheter. And because the knitting community is so much larger than the crocheting one, I know my crochet patterns will have less exposure in the end. 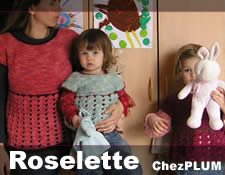 Finally, I had been thinking about the “featured crochet pattern” on Ravelry for a while. It’s quite a budget though, at $40 for only half a month. I selected my most popular crochet pattern, the Roselette.
Now that it’s over, I can’t say I’m thrilled, but at least I’ve covered the costs involved, and it probably got me some wide exposure.
To give you the raw figures,
– Ravelry gives me a total number of impressions of the ad of 83 000, and 671 clicks.
-The Roselette had 66 projects before the ad, and 76 now, many of which being from people I know had already the pattern. I’m thinking they may have been “reminded” of the pattern by seing it over there, but it still serves the cause as other people see their FOs, queue the pattern or fav’ it.. Any buzz is good 🙂
– Only 3 people queued it during the time of the ad. But a whole lot more added it to their favorites.
– The Violaine pattern also benefited from the ad, with 2 more projects (19 to 21) and 7 queues. And a lot of hearts.
– All in all, I sold 9 copies of those 2 patterns combined during those 2 weeks. Really not “great”, but it does cover the cost of the ad. Some of the other patterns I sold during that time may be derived from the exposure I got for my patterns too. And I’m aware I may sell some patterns in the weeks to come from people who first heard about the pattern in that ad.

As for the other venues. I did some Crafster ads a few years ago, before Ravelry even existed. It didn’t cost me much then (about $15) but I never really saw results from it. I figured most of the people on Crafster were there for free stuff and weren’t ready to pay for patterns.

I also did a couple of the Etsy Showcase ($7 per day), where you can now be featured in a category. I didn’t get a single sale the last time I did it. :-/ I don’t think I’ll ever try again. Honestly, it’s cheaper to relist several time that day and you may get more exposure from that 😉

If you also have some feedback to share about advertising online, I’d love to hear it !! 😀

1 thought on “Thoughts on advertising on Ravelry, Crafster or Etsy…”