Publishing 2 posts today but I’d just rather make the most of the free time ahead for once, with both girls asleep and hopefully recovering from the cold and ear infection they caught last week. They’ve had plenty of time inside and rest but I guess they’re just tired of this first trimester of school/daycare…
Today it’s snowing, even here in town. About 5 cm of snow on the ground, looks great! We spent last week-end in my gran’s chalet in Vercors and had the best time. Laurent and I realised we are SO not city people and need to move back to the mountains soon. We need to get MonEscapade in full gear asap so we’re independant and can move in a little chalet of our own (THE dream!!) 😛
Both girls skied (even Maud who went on the lift with her dad and LOVED every second of it) and I believe next time we go I’ll be on skis along with them too. (with the new skis Santa brings me, wink, wink..)
Seeing my spinning tools, my cousin who likes to do woodworking said he’s going to have a shot at making a kick spindle, and maybe some spindles and WPI tools. Ha, that would be the best. He’s also interested in making a full spinning wheel… 😀 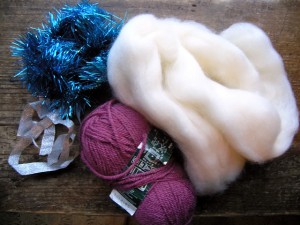 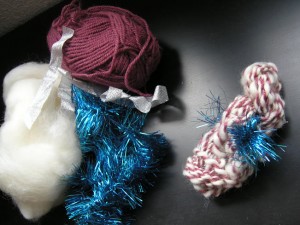 Prune asked me to make her a yarn with garland so I took along some Corriedale, blue garland, silver ribbon and pinkish yarn to ply it with, pink being her favorite color of course. Inserting the garland worked all right, but the ribbon was another story. Some of it may unravel soon enough, but that’s still a good learning experience. Now I just need to decide what to do with those few yards.. Maybe a scarf, or a little sweater for her doll as she suggested. That would be one funky sweater for a little doll !!! 😀 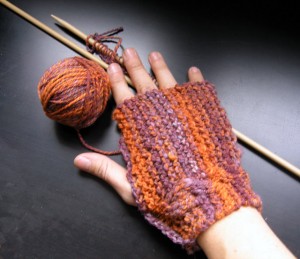 Ysolda showed some of the various so-so stages to a succesfull design not long ago and I thought it was both brave and a great idea. So I’ll share mine too: I wanted to knit some sideways garter stitch mini-mitts with handspun and had a go at it. First try was okay, but slightly short. No problem, I ripped and started again, adding a cable around the wrist. Uho. As my husband said, they look like a beginner’s project. Okayish but not what you’d call pretty. So I’m just putting them aside until inspiration hits again. 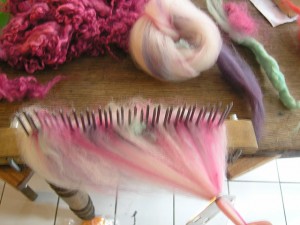 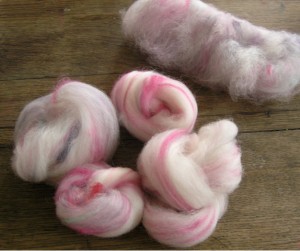 I’ve also played some more with my Hackle this morning. Shhtt, don’t tell though because this is for a swap..;-)
I’m really glad because I think I’m totally getting it now. It worked so perfectly and I managed to pull most of the fiber through the diz, look at those oh-so cute little buns of fiber !!
I used some white Falkland combed top, and added Orchid Cotswold locks from Woollady on Etsy. I also added a bit of purple stash wool. This time I didn’t overload the hackle, used the smaller hole of the diz with the smooth angle towards the hackle. And it worked like a dream.

I hope my swap partner will like that fiber. Next time I’m preparing some for me !! 😀

Oh. So my final review on this CatskillMtnFibers hackle.
– I LOVE the fiber prepared with it, completely predrafted, the colors are perfectly blended but not too much so you can still see all the different fibers.
– The hackle itself, although I don’t have much experience with other hackles, is very sturdy and well built, while remaining pretty. The system to attach it to any table works perfectly.. I usually have to hold my table when pulling on the diz but the hackle won’t move ! 😀
– It’s easy to use and its small size makes it easy to handle and store. I could imagine that some people with an access to a large studio might appreciate a larger hackle though, Laurel, are you going to make it available in several sizes ? 😉 😛 (yes of course I’ll have a crafting studio … some day !!)
– Last but not least, the price tag is so reasonable that you won’t have to save much for it !! 😀
– ETA:I don’t think it would work much with very fine or super short fiber, but it works like a dream with more common fiber as base, like Corriedale, BFL, Falklands, Fine Merino, South African Fine wool etc… Of course you can mix those with little bits of this and that because that’s where the fun is, just make sure the “main” components are not superfine fibers…

I’ll try to make a video of the whole process next time.

See also my other posts on the hackle !