I first met Laurel through Ravelry in the Fiber Swap Club. She’s the one who sent me the beautiful Merino roving I used for my mini-shawl. She’s lucky to have a very crafty husband who makes all sorts of tools, including hackles which Laurel sells in her Etsy store on top of her fiber goodies.
When Laurel so kindly offered me to test their brand new hackle design… Of course I said Yes !! 😀

I first tried it right after I received it last week, and had a second go at it last week-end. Here’s about my first try. (Will post about the rest later this week in a second post) 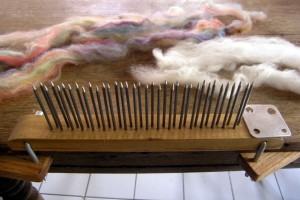 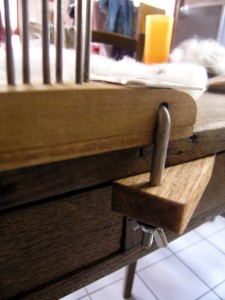 Here’s the beast. It’s actually smaller than I expected (feared), which is great in my house with little hands around. It’s small enough to tuck it in a drawer, and yet large enough to put a lot of fiber on it..
The nails are verrry sharp to catch a lot of fiber (yup, I experienced it the hard way..) and it looks really professional. Look at that clever system to fix it on any table. Adapts easily to pretty much any table.. including mine with very short sides. 😛 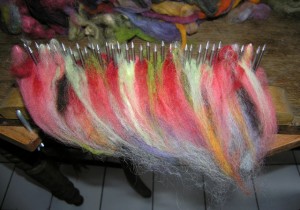 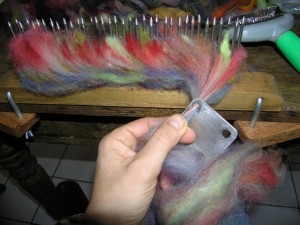 As I said, I first tried it minutes only after receiving it last week.. Had a look at a few videos on Youtube, grabbed some random loose fiber and mixed it… Plain fun ! 😀 Then the hard part was to pull the fibre through the diz (also included with the hackle, how cool is that ?!!) That was quite an effort and I know there must be tricks to do it better and leave less fiber at the end on the hackle (will get better with practise I’m sure), but the resulting long piece of roving (can I call it roving ?) looked great. And it spun so easily and beautifully !!!!! 😀 (will add a pic of resulting mini-skein later). 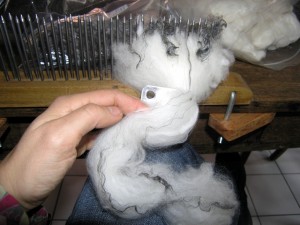 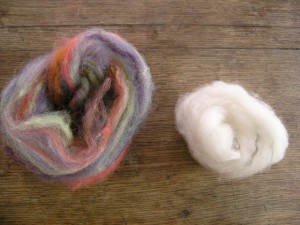