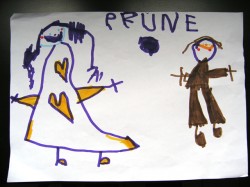 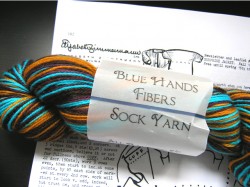 Yesterday it was my birthday, and on top of a beautiful drawing made by Prune, I was spoiled by Emily who surprised me at our weekly SnB meeting with a skein of beautiful sock yarn (from the All raveled up Sock Club), the pattern for the Suprise jackets (both baby and adult versions) and a pretty water bottle. SO COOL !! 😀 The yarn doesn’t show well on the picture but it’s a lovely mix of turquoise, brown, plum and gold. I don’t think I’ll make socks with it but will look around Ravelry for a nice pattern to knit it up ! 😀
Thanks again Emily !! 😀

Another cool news is one of my close friend is pregnant ! Yay, some baby knitting will be added to the list ..! 😀 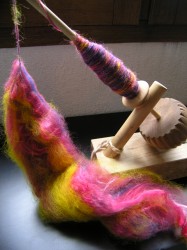 I’ve just started spinning some of the awesome batt from the Rav’ Fiber swap club. I’ll probably ply it with some thread, and would love to knit some sort of artsy feather and fan shawl with it. I can’t stop looking at Jane Thorley’s Feather and Fan organic wrap, and even though I hate the thought of spending $10 on a single pattern, I don’t think I’ll be able to resist long: this yarn might just be the right incentive ! 🙂

I’m done crocheting all the squares for my friend’s blankie. Now to join the squares and crochet a nice edging around it. I hope to post pics next time ! 😛